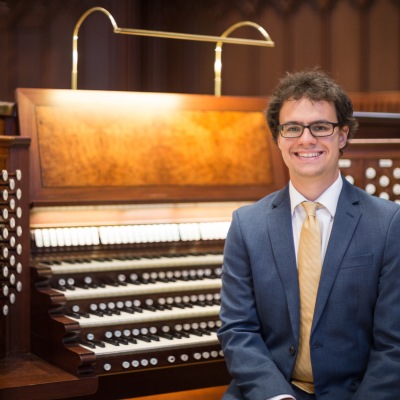 Scott Scheetz began playing piano at age three and realized soon after that music was his greatest passion in life. In middle school, he started organ lessons, was highly involved in his church’s music program, and gained recognition in his hometown of Aiken, SC, as a lounge pianist specializing in the music of Billy Joel. In 2010, he won the East Carolina University Pre-College Organ Competition for the Southeastern Region of the United States.

Scott completed his Bachelors of Music in Organ Performance at the Jacobs School of Music, Indiana University, where he studied with Dr. Christopher Young. He completed his Master of Sacred Music with a focus in Organ Performance at Perkins School of Theology, Southern Methodist University, where he studied with Professor Stefan Engels.

Scott has served in organist, choirmaster, and music director positions for over a decade in both liturgical and non-liturgical congregations, encompassing a variety of denominations and worship styles. His passion is making music with people of all ages, and helping them to deepen their relationship with God and each other through music and worship.

In addition to piano and organ, Scott plays percussion, guitar, bass guitar, and works as an automotive, portrait, wedding, and event photographer in the Dallas/Fort Worth Metroplex. In his spare time he enjoys working on cars, playing jazz, rebuilding keyboard instruments, and repairing vintage electronics.

Scott met his wife Katie at Indiana University while they were both studying organ performance, and they were married in 2018. They live in the Mid-Cities area and enjoy playing duet recitals together and going to car events.